On May 18, 1980, almost 35 years after giant atomic mushroom clouds engulfed and annihilated the Japanese cities of Hiroshima and Nagasaki, exhibiting the awesome capability of man-made destruction, Mother Nature reasserted herself as the ultimate agent of pitiless destructive wrath. An explosion roughly 50 miles northeast of Portland, Oregon, carrying the energy of 20,000 atomic bombs, terrorized an entire region. What started as a beautiful and tranquil Sunday morning in the Pacific Northwest ended in a matter of minutes with a lethal combination of an earthquake and a ferocious landslide, triggered by the partial collapse of a mountain. By day’s end, the eruption of Mt. St. Helens was the deadliest and most economically and environmentally destructive volcanic eruption in American history.

The fateful morning began like any other when at 7 am U.S. Geological Survey volcanologist David A. Johnston, finishing up his Saturday-night shift at an observation post about six miles north of the volcano, radioed in the results of some measurements he had conducted. His monitoring data consisting of seismic measurements, rate of bulge movement, sulfur-dioxide gas emission, and ground temperature, revealed no unusual changes in pattern from the preceding months that could be interpreted as cause for concern. Officials already knew that Mt. St. Helens was showing the warning signs that it was ready to burst on a large scale for the first time in over 120 years. For nearly two months before it exploded, the volcano had experienced relatively minor eruptions, steam venting, seismic activity and a visible “bulge” continued to grow on the mountain’s north face. An evacuation of the area, adhered to by almost all residents and workers, was consequently in effect.

While the eruption was then somewhat anticipated, the manner in which it unfolded and the extent of its devastation was completely unprecedented. By 20 seconds after 8:32am, a mere hour and a half after Johnston’s report, the once serene landscape encompassing Mt. St. Helens was dramatically desolated. 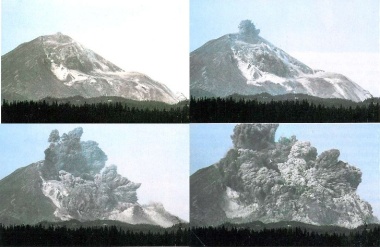 As a result of a 5.1 magnitude earthquake about one mile beneath the volcano’s core, the bulged and unstable north flank of Mt. St. Helens collapsed, triggering the largest landslide in recorded history. Snow and ice on the top of the mountain melted instantly, creating a raging debris avalanche of water, mud, and rocks barreling at speeds north of 155 mph. It swallowed everything in its path including the entire surrounding forest. At one point, the advancing front of the avalanche had the momentum to flow up and over a ridge more than 1,300 feet high.

The avalanche surged further into and across Spirit Lake at the base of the mountain and into the North Fork of the Toutle River, causing widespread flooding in surrounding areas.

Covering an area of about 24 square miles, the avalanche advanced more than 13 miles, filling the valley to an average depth of about 150 feet.The debris deposited into Spirit Lake raised its bottom by about 295 feet and the water level by about 200 feet.

The cascading landslide simultaneously removed the bulge, which subsequently depressurized the volcano’s magma chamber, leading to the vertical explosion.

Hot ash and rock shot out at speeds upwards of 300 mph, some 12-15 miles into the sky, creating a mushroom-shaped plume of 540 million tons of ash. This cloud spread quickly by a remarkably forceful pyroclastic flow, the name for the fast-moving current of extremely hot gas (up to 1,830°F) and molten rock, that bursts violently from the eruption epicenter. Rapidly, cities and towns across Washington, Oregon, Idaho, Montana and beyond were blanketed by 3-5 inch thick strands of black ash. Spokane, Washington, about 250 miles northeast of the volcano, experienced complete darkness that day within three hours. The scene conjured images of a biblical plague and widespread panic developed among residents across the region. 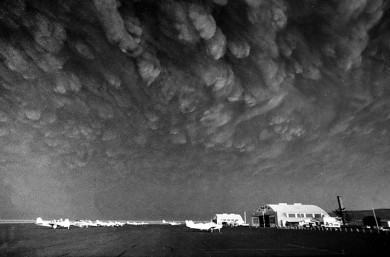 After all the dust settled, the extent of the devastation was staggering. The International Trade Commission determined the total cost of damage and rebuilding efforts at an estimated $1.1 billion. Some 250 homes, 47 bridges, 15 miles of railways, and 185 miles of highway were destroyed. Heavy logging trucks and machinery were catapulted and displaced as if feathers in the wind. Over 200 square miles of forest was either liquidated or felled leaving a barren and scorched earth. Thousands of animals were killed instantly, and an ecosystem was forever altered. The once august Mt. St. Helens summit was replaced with a one mile wide and 2,084 foot deep horseshoe-shaped crater, shaving the elevation of the summit from 9,677 to 8,366 feet. 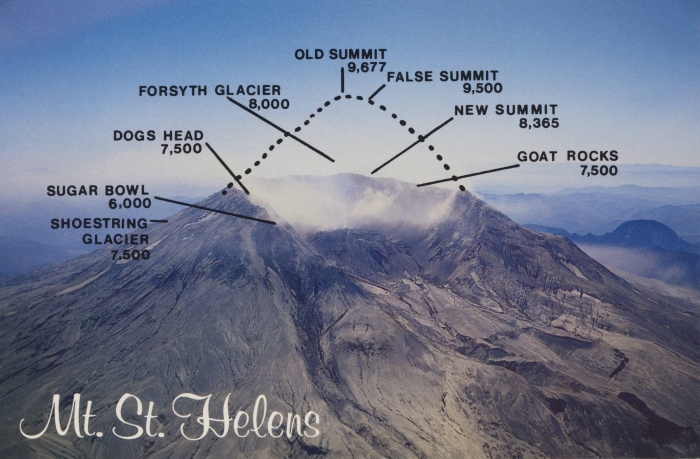 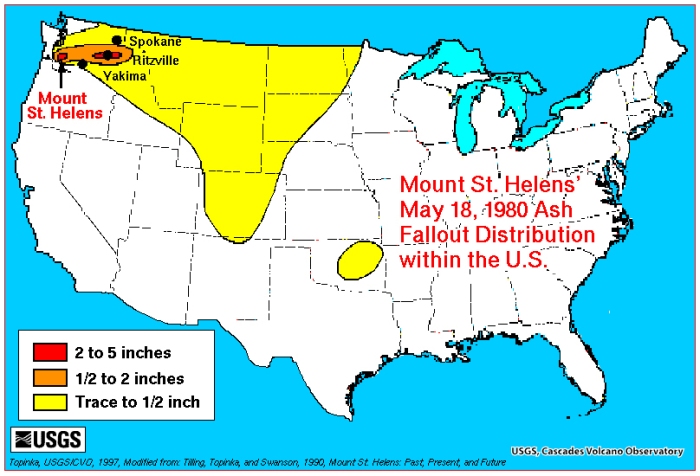 Worst of all, some 57 people, including volcanologist Johnston, lost their lives. Incidentally though, the pre-eruption evacuation and the fact that the eruption occurred on a Sunday saved the lives of many loggers and Forest Service personnel, who would have otherwise been working in the area.

The eruption of Mt. St. Helens is by far the seminal volcanic event in U.S. history not only because of its sheer impact, but in many ways because it ushered in a national consciousness about the threat of volcanoes in the contiguous states. Volcanic eruptions, previously seen as phenomena of Alaska and Hawaii, suddenly arrived as a stark reality in the “lower 48.” Swiftly, the legendary tale of volcanoes throughout history, including Mt. Vesuvius’ destruction of Pompeii, “the year without a summer” courtesy of Mt. Tambora, the tsunamis unleashed by Krakatoa, or the obliteration of the Minoan civilization by the volcano on Thera (Santorini), had an American chapter.

The eruption launched a whole generation of volcanologists, inspired to study the causes for, impact of and recovery process following volcanic events. It became the most intensively studied and photographically documented volcanic eruption in the world to date. For a number of Native American tribes of the Pacific Northwest, however, the Mt. St. Helens eruption was yet another chapter in a fundamental heritage story that mainstream history tends to pass over. The indigenous interpretation though provides a unique insight into the volatility of the highest peaks of the Cascade range.

To understand the Native American perspective, it is important to recognize that Mt. St. Helens was for the majority of its history considered a stunning gem in this range of volcanic peaks that stretch from Northern California to British Columbia, Canada.

Known for many years as the “Mt. Fuji of America,” for its snow-capped symmetry, Native American tribes and European explorers alike marveled at this sleeping beauty within the Pacific “Ring of Fire.”

Although the exact storylines have different variations, a general trend appears among the lore of the Klickitat, Puyallup, Cowlitz, and Yakima tribes regarding Mt. St. Helens’ eruptive nature. For them, the mountain represents a beautiful woman who often finds herself caught in love triangles among her fellow peaks, personified as both suitors and rivals. Mt. St. Helens was originally known to these tribes variously as Loowitlatkla/Louwala-clough/Lawetlat’la/Si Yett (“Loowit” for short, meaning “Lady of Fire” or “smoking or fire mountain”). Loowit was a wrinkled old woman who was turned into a beautiful young maiden by the Great Spirit Tyee Sahale. The tribes believed that a natural stone bridge (created by a landslide of rocks) on the Columbia River, was the “Bridge of the Gods,” and in the center of the bridge’s arch burned the only fire in the world.

Loowit lived under the bridge and tended to the fire. The fame of her wondrous beauty quickly spread far and wide and both of Sahale’s sons Wyeast and Klickitat (also known as Pahto in some tribes) fell in love with Loowit. But she could not choose between them.

The resulting fight led to the burning and destruction of villages and forests, perhaps manifested by earlier earthquakes and volcanic eruptions in the Cascades. When Sahale witnessed this destruction, his raging anger shook the earth, collapsing the bridge into the river, thus creating the rapids of the Columbia River Gorge. He also struck down the three lovers and raised up mountains in their place. Loowit’s beauty was symbolized in her mountain’s (Mt. St. Helens) symmetrical and snow-covered cone, while Wyeast’s mountain (Mt. Hood) stands tall with pride and Klickitat’s mountain (Mt. Adams) bends his head in sorrow, sulking to see his fallen love, Loowit. The Cowlitz and Yakima alternatively tell of a time when Mt. Rainier had an argument with his two wives, Mt. St. Helens (once again appearing as Loowit) and Mt. Adams. Loowit was overcome with jealousy, blew her top, and knocked the head off Mt. Rainier; both events perhaps demonstrated by a previous landslide on the top of Mt. Rainier and a pre-1980 eruption of Mt. St. Helens.

Through the lens of the indigenous people of the Pacific Northwest, the 1980 eruption of Mt. St. Helens can thus be envisioned as a moment of Loowit once again asserting herself, as if to settle once and for all the squabbles between Wyeast (Mt. Hood) and Klickitat (Mt. Adams), or as an escalation of her dispute with Mt. Adams the “competing wife” and Mt. Rainier “the uncommitted husband.” Her 1980 eruption reminded us that she was the center of attention and affection among a range of majestic peaks. Perhaps the catastrophic nature of the 1980 eruption also symbolizes the destructive attraction of Loowit’s beauty, marking her second transformation; this time from “Beauty” to “Beast.”

Following the catastrophe, in 1982, the Congress and President Ronald Reagan designated the Mt. St. Helens eruption site a protected area as a 110,000-acre National Volcanic Monument under the jurisdiction of the Department of Agriculture’s U.S. Forest Service. This area within the Gifford Pinchot National Forest in the state of Washington is protected primarily for the purposes of volcanic research, education, and continued environmental recovery. Currently, discussions continue over whether the Mt. St. Helens region should be converted to a National Park, which would provide it with increased jurisdiction and funding under the Department of Interior’s National Park Service to handle the rising numbers of visitors who come for tourism and recreation.

Arguably, however, preservation of the area as a National Park would also importantly give this largely untold Native American heritage story a larger platform in the land conservation conversation. We naturally tend to view this land solely through the lens of the 1980 eruption. Certainly, scientific study of the causes and effects of the eruption have been groundbreaking in the field of volcanology, which ultimately can help mitigate the level of destruction in future volcanic events. Protection of the land for continued healing of the ecosystem is also a primary concern.

But we must also recognize how Native American interpretations of natural disaster events offer a personalized approach to understanding their magnitude and therefore must also be cherished and promoted. Educating ourselves on this perspective reminds us of how powerless we are in the face of forces greater than ourselves, because it provides a deeper understanding and appreciation of cataclysmic events beyond quantitative and scientific models. Despite all our technological prowess, human ingenuity was shown after all to be futile in the face of Mt. St. Helens’ instigation of an earthquake, avalanche, eruption, pyroclastic flow, flooding, and ash cloud.

To the Pacific Northwest tribes, the eruption of Mt. St. Helens is more significant for its enduring and humanized story that strikes at the core of their identity. If we consider the story of the Cascadian love triangle, we can expect Mt. Hood, Mt. Adams, Mt. Rainier, or even Mt. St. Helens to cry out in despair again in the near future in a fiery manner. We can thus learn from Native American tradition as it elevates the natural world as an independent major player in history, something that conventional historians can often neglect when providing context for the events of our time. 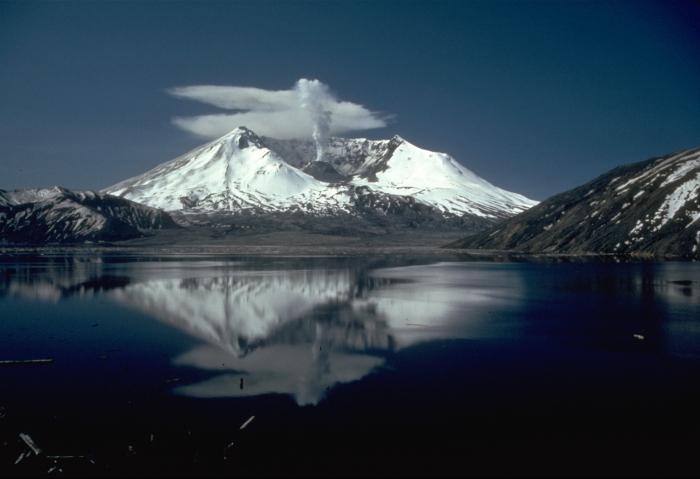 One thought on “Mount Saint Helens: The Volcano at the Center of an Eruptive Cascadian Love Triangle” 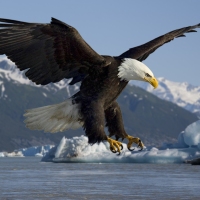