Extremes are fascinating. Young boys and girls with eager faces pour through National Geographic to gape at mountain climbers, to marvel at the diversity of life in the pitch-black darkness of the ocean’s trenches, and to transport their imaginations to the deck of the Victoria as Magellan slipped through the straits that now bear his name. We all can name the largest state and the hottest valley, and who hasn’t dreamed of riding US 1 to the end of the Florida Keys? But for true limit-junkies, you need a boat or a plane to reach the further limit of the string of islands, Dry Tortugas. The tiny archipelago is certainly one of America’s extreme national parks, providing a vital refuge for birds and sea life, but its extreme location has also firmly entrenched the tiny spits of land in the annals of history.

While not a few think of Jamestown as the genesis of the United States, you only need spend an hour or two in Florida (or with a Floridian) to discover the err of your ways. That state in fact has the honor not only of St. Augustine, t

he oldest European founded settlement in our country, but its very name—Florida—is the oldest European place name still on a US map. Ponce de León christened the spring breakers’ paradise in 1513 and on his return to Puerto Rico landed on a tiny island covered in tortoises. Las Tortugas thus holds the highly distinguished honor of the second oldest place name in the fifty states (there’s a fun fact for your next dinner party).

Trivia aside, with the arrival of the Europeans, the tiny archipelago at the end of the Keys became more than a sunning station for reptiles. It hosted the beached Spanish treasure galleon Nuestra Señora del Rosario, the only survivor of the fleet hammered by a hurricane in 1622 that spurred one of the first attempts at deep sea salvaging. Later in 1742 the English frigate HMS Tyger was stranded on Dry Tortugas. The War of Austrian Succession was in full swing even in this remote backwater of the Caribbean and Tyger’s crew fought off a Spanish sloop from makeshift batteries set up with the ship’s guns.

As the United States entered its adolescence, politicians in Washington believed that the Florida Keys could become a Gibraltar of the West, and immediately after their acquisition in 1821 the navy began to build. The War of 1812 taught the Americans that their coastlines and commerce were vulnerable, but by firmly controlling the ninety-mile passage between Key West and Cuba, king cotton could continue to reach foreign markets in wartime. Commodore John Rogers visited Dry Tortugas in 1829 and immediately realized the need to fortify the position. While the islands lacked fresh water, the harbors afforded excellent anchorage for even the largest naval vessels of the time. Rogers understood that if occupied by only a few foreign ships, Dry Tortugas could disrupt American trade and thus required a strong advanced post. If the Keys were to be America’s Gibraltar, Tortugas would be the rock. It should come as no surprise, however, that only after seventeen years of politicking was the first brick laid in 1846 for the massive Fort Jefferson. The masonry fort was to house 1,000 heavy guns in four firing tiers and was viewed as the apogee of the so-called “Third System” of the nation’s coastal defense. The fort is the largest masonry structure in North American, but advances in weapon technology rendered it obsolete almost as soon as construction began. With the widespread use of rifled cannon, tall brick structures stood up to fire about as well as log cabins. The project, however, continued right up to and during the Civil War.

Although no cannon was fired at or from her in anger, Fort Jefferson played an important role during the conflict. The isolated position made it uniquely suited for a military prison with Key West seventy miles to the east and captured deserters began arriving by the end of the first campaign season. The prison’s most infamous inmates arrived in 1865 just after the war had ended. Dr. Samuel Mudd, Edmund Spangler, Samuel Arnold, and Michael O’Laughlen, four of those convicted in the plot to assassinate Abraham Lincoln, were sentenced to a miserable life on Dry Tortugas where the summer temperatures reach 90 degrees daily, sometimes not slipping below 80 in the evenings.

Mudd, of course, is the most well-known of these convicts and whose association with John Wilkes Booth and trial are controversial to this day, but he was assigned to live out his life-sentence in Fort Jefferson. Desperate times called for desperate measures and after a failed escape attempt only a few months after his arrival, he was—literally—thrown into “the dungeon.” Instead of the open air casements where most of the prisoners were kept, the dungeon was an airless room on the lowest level of the fort. Dr. Mudd, however, proved his worth during the yellow fever outbreak of 1867; tending to the sick he himself caught the sickness, but survived to be pardoned by President Andrew Johnson in 1869.

The fort, already militarily obsolete, became more and more burdensome for the government. The daily tropical weather, coupled with the frequency of hurricanes required constant repair and preservation work. Water, too, was a persisted problem. Rainfall was seasonal and rarely enough to fill adequately the massive cisterns. The position, now, had less and less strategic value. For the remaining years of its active life, Fort Jefferson served as quarantine post of the Marine Hospital Service.

The 1935 Antiquities Act designated the fort as a national monument, but it wasn’t until 1992 that Congress established Dry Tortugas as a national park. While Fort Jefferson remains the most visually impressive sight upon arriving on the islands, the park’s main draw is more subtle. Like when the Spanish first arrived, the archipelago is teeming with wildlife. Whether you’re an avid bird watcher or accomplished snorkeler, Dry Tortugas is well worth a day trip by ferry from Key West. No longer do soldiers’ cannon barrels peer over Fort Jefferson’s battlements but researchers’ binoculars. While the American government first invested in the place to preserve national commerce, overtime it has proved its value in another way, as a refuge for the nation’s natural treasures. 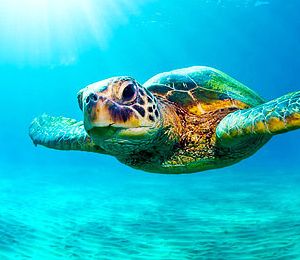 Stewart, George. 1945. Names on the Land: A Historical Account of Place-Naming in the United States. New York: Random House.