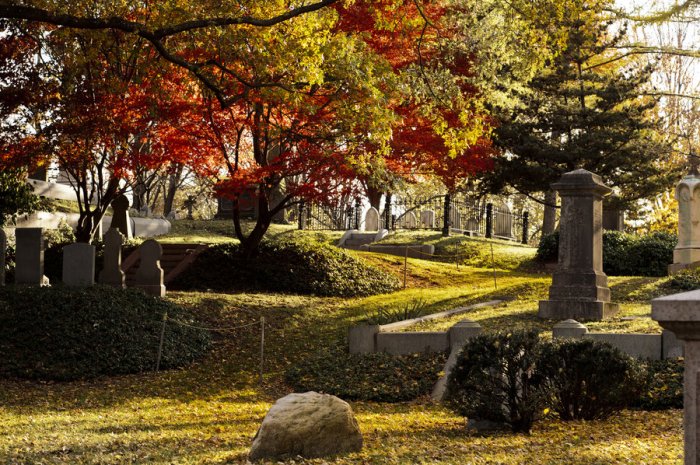 Since its dedication in 1831, Mount Auburn Cemetery in Cambridge, Massachusetts has welcomed visitors to its many thresholds. It has most principally separated the living from the dead, as the country’s first cemetery. Americans beforehand had buried their dead in church graveyards and municipal burial grounds located within city limits. Such plots became overly expensive, overly crowded, and ultimately inadequate as cities expanded and grew through the nineteenth century. Graves would often be stacked five to six coffins deep, others simply dug up and reused. During times of epidemic, burial grounds became cesspools of disease, leading to calls for sanitation and reform.

Relocation to a larger burial ground in Boston’s rural outskirts meant not only better treatment of the city’s dead, but a healthier Boston. Thus was born a multifaceted dichotomy with the fulcrum at Mount Auburn. The rural cemetery movement, born in part of physical practicality, reinforced a contrast between the sacred and the profane. Boston was now more fully a secular and material place, with death’s spiritual essence being relegated to the natural outskirts. Rural cemeteries like Mount Auburn could only be entered by grand Gothic and Egyptian Revival gates—elaborate thresholds that distinguished the sacred “city of the dead” from its commercial counterpart. 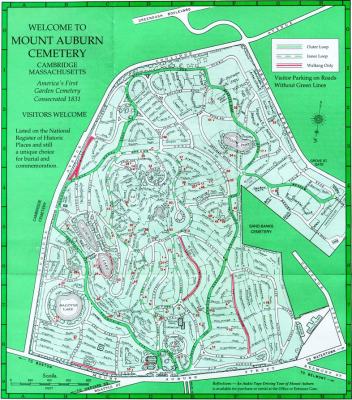 Contemporary city planners, whose psyches were steeped in a seventeenth-century English aesthetic philosophy, envisioned Mount Auburn in this dualistic way. Once through the gate, one could leave behind the hustle and bustle of a mercantile Boston, and wander meditatively among the spiritually-laden paths of the dead. Intentional dichotomy was widespread. Contrasting a rural country with an urban city, planners envisioned winding, byzantine paths to contrast the gridded streets of developing American cities.

A calming nature and the chaotic artifice of industrial urbanity thus became a leading duality among those who discussed the merits of rural cemeteries. A visitor to Lowell Cemetery, built a decade after Mount Auburn, reflected in 1843, “You stand as it were, beyond the world, beyond its cares, its strifes, its false, ignis fatuus hopes, and its griefs. You have entered a realm of quietude, melody and beauty.” Historian Thomas Bender, who speaks poignantly to this counterpoint thesis, states that planners saw the rural cemetery as a “sanctuary within an urban-industrial society.” As the nation industrialized, those living in the din, soot, and shadow of increasingly mechanized urban centers began romanticizing nature as a coping mechanism.

Yet if city-builders steeped their new creation in romantic rhetoric as a way of coping, the ensuing dichotomy between city and nature was hardly concrete. Mount Auburn was still a product of, and very much a part of an urbanizing Boston. Its natural state existed only at the will of its stewards. Even as the cemetery grounds separated and sheltered the dead from the increasing chaos of urban life, it intentionally welcomed the denizens who propagated such chaos. A month after its consecration, Henry Bellows declared that rural cemeteries “are not for the dead. They are for the living.” As such, tourism thrived at Mount Auburn. 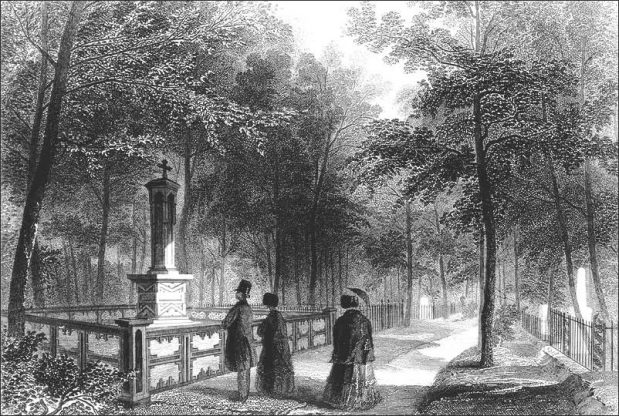 Far from being considered morbid or solemn, the cemetery functioned as a recreation area for picnics, carriage rides, leisurely strolls, and weekend family outings. In his book The Last Great Necessity: Cemeteries in American History, David Charles Sloane notes, “As the first planned landscapes generally open to the public in America, rural cemeteries were immensely popular.” They functioned as the precursors to public parks. Their immense popularity as a major tourist attraction, replete with guidebooks highlighting popular routes and notable monuments, signaled to city planners a demand to incorporate more green space into the built environment. When public parks would later come to fruition, such as New York’s Central Park in 1873, they would draw inspiration largely from the rural cemetery movement. 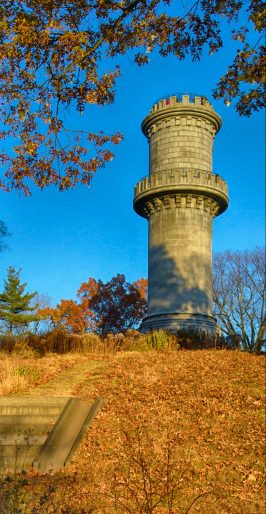 Père Lachaise Cemetery in Paris, built in 1804, served as inspiration for Mount Auburn, but the American cemetery took its landscaping cue from England’s more informal garden ideology that sought to recreate nature in its pristine state as an idyllic, pastoral landscape. English theorists divided landscape architecture into three categories: the “Beautiful,” the “Picturesque,” and the “Sublime.” At each extreme, the Beautiful represented humanity’s mastery of the natural world, such as at Versailles, while the Sublime represented wilderness untrammeled by man, symbolizing civilization’s transience. Mount Auburn’s style—the Picturesque—represented the balance between nature and civilization.

And no one structure better exemplifies the delicate balance of Mount Auburn’s landscaped symbolism than its structural centerpiece, the Washington Tower. Designed by the cemetery’s brainchild, Dr. Jacob Bigelow, the observation tower has offered an unobstructed view of downtown Boston since its construction in 1852-54. Supreme Court Justice Joseph Story, in his consecration address in 1831, captured not only Mount Auburn’s liminal essence, but described the important role observation played in its propagation.

All around us there breathes a solemn calm, as if we were in the bosom of a wilderness, broken only by the breeze as it murmurs through the tops of the forest, or by the notes of the warbler pouring forth his matin or his evening song. Ascend but a few steps, and what a change of scenery to surprise and delight us! We seem, as it were in an instant to pass from the confines of death to the bright and balmy regions of life. Below us flows the winding Charles, with its rippling current, like the stream of time hastening to the ocean of eternity. In the distance, the City—at once the object of our admiration and our love—rears its proud eminences, its glittering spires, its lofty towers, its graceful mansions, its curling smoke, its crowded haunts of business and pleasure… There is, therefore, within our reach, every variety of natural and artificial scenery, which is fitted to awaken emotions of the highest and most affecting character. We stand, as it were, upon the borders of two worlds…

Stark dichotomies found in the flowery rhetoric of Mount Auburn’s contemporaries speak to mid-century Americans’ views on the relationship between life and death, nature and artifice, and city and countryside. But the overwhelming success Mount Auburn achieved came from the intentional blurring of such contrasts. A peaceful, sanitary place for rest found success as a tourist hotspot. A nature of sylvan beauty with carefully cultivated human touches represented a picturesque balance between the beautiful and the sublime. Finally, an observation tower, located in the heart of this rural cemetery, ascended above its natural resting place and provided visitors with a view of the industrial, urban environment whence it came. Standing atop the Washington Tower, city and nature became one, and still do today. Such blurring of dichotomy reveals not only how Americans viewed their relation to the natural world, but demonstrates that stated distinctions are never quite as stark as they may appear.

Katherine Murphy and Kristen Rohde, “’This Embellishment of Nature’: The 19th Century Picturesque Landscape and Worcester’s Rural Cemetery,” in Worcester and Its People, undated.

Rebecca Greenfield, “Our First Public Parks: The Forgotten History of Cemeteries,” in The Atlantic, March 16, 2011.

Walter Luke, “’An Interval of Tranquility:” The Rural Cemetery Movement in the United States,” in Victorian Gothic: Much of Madness, and More of Sin, June 4, 2011. 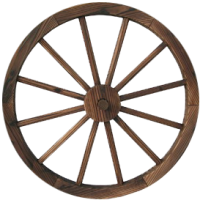 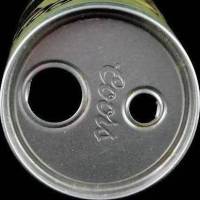