In the quiet Dublin streets of Easter Monday, 1916, columns of men and women began to move. Dressed in a menagerie of green uniforms, civilian clothes, and bandoleers and armed with Mauser rifles, over 1,200 people marched through the thoroughfares of the city. Ned Daly led his battalion to occupy the Four Courts administrative area of the city center, while James Connolly and Padraig Pearse led a force to occupy the General Post Office (GPO), which dominated the busy O’Connell Street on the north side of the Liffey. At the GPO around midday Pearse read the Proclamation of the Irish Republic, declaring an independent provisional government for Ireland separate from Great Britain. Around the same time, the first fighting broke out between British troops and Irish volunteers at the Four Courts. Over the next week, the British would fight a series of street battles throughout Dublin in their attempts to eradicate the city of the radical Irish rebels. Following the insurrection, British officials executed sixteen of the captured leaders including both Pearse and Connolly. While less than 500 people died in the

entire affair that came to be known as the Easter Rising, the repercussions of the rebellion would shape the rest of the century for both Ireland and the British Isles as a whole.

But this story is not simply an Irish one. To fully understand the circumstances that fostered the rising, the story must start earlier, and far from the Dublin streets. In 1871, a ship named the Cuba pulled into New York Harbor and a group of expatriates disembarked into their new homeland. They came from British prisons but they were Irish born radicals. The two most notable men, Jeremiah Rossa and John Devoy, had been involved in a series of plots against British rule in Ireland in the 1860s as part of the Irish Republican Brotherhood (IRB) and had been banished to North America for their troubles. They received a “hero’s welcome” in New York, however, as throngs of Irish Americans greeted them at the docks.

Shortly after arriving in New York, the two men even accepted an invitation to travel to DC and dine with president Ulysses S. Grant who recognized these men as patriots. Once settled into their new home, they became involved with other activist Irish radicals already established in the U.S. John Mitchel, an Irish nationalist who had been in exile in

America since 1854, and many other Irish veterans of the U.S. Civil War began to flock to Rossa and Devoy. They became leaders in the two prominent Irish republican organizations in the U.S., the Fenian Brotherhood and Clann na nGael. They also established connections with the criminal elements of Irish America in the cities of New York, Philadelphia, Boston and Chicago, where large immigrant populations fostered gang violence and turf wars.

And they began to print. Through this outlet, they continued to express their radical ideals for an independent Ireland and garner support across the country from Irish Americans and leftist sympathizers. Rossa established the first Gaelic newspaper in the U.S.,  The United Irishman, and Devoy churned out polemical exposés on “British dungeons” and “Saxon oppression” as a journalist for the New York Herald. By 1880, Rossa began to promote an explicit terrorist agenda in his Gaelic newspaper, calling for bombings in England to bring about Irish independence. He called on young Irish Americans “to make assaults in all directions, so that the suffering, bitterness, and desolation of Ireland might be visited upon the oppressors themselves.” Rossa dreamed of sending “waves of skirmishers directly to England” to “slaughter indiscriminately” until the British would set Ireland free.

In 1881, young Fenians began to take heed to Rossa’s call. Consequently, between January 1881 and May 1882, four bombs detonated in England. In 1883, Rossa sent fellow Irish-American Tom Clarke and Irish-Canadian Alexander Sullivan to London to wreak havoc as part of the “Dynamite Campaign.” While Clarke was captured during an attempt to blow up the London bridge, a series of bombs exploded in the capital and elsewhere, and the low level terror attacks continued through 1885. Rossa continued to call for armed resistance to British rule through the later years of the nineteenth century. In 1892, a British agent stationed in America, Henri Le Caron, complained that “he advocates, in the safety of his American city, three thousand miles from the seat of danger, the most desperate of enterprises; and without the slightest pang of compunction or twinge of conscience he rushes his poor dupes across the water to their fate on the scaffold or the living death of penal servitude.”

While Rossa printed, Devoy organized, maintaining connections in Ireland and fundraising throughout the U.S. In 1903, he opened his own New York paper, the Gaelic American,  garnering wide readership among both Irish Americans and other New Yorkers. Both Rossa and Devoy, rather than being condemned as bloodthirsty radicals, were favored by the American public. American views on Irish immigrants had become much more positive after the U.S. Civil War due to mass participation in the Union army, and by the turn of the century, many Americans sympathized with republican calls for Irish independence. In the election of 1912, Woodrow Wilson gained the substantial Irish American vote by playing up his own Ulster heritage.

By the outbreak of the Great War in Europe however, American sympathies for Ireland began to cause problems as U.S. policy makers played a tricky game between neutrality and support for Great Britain and its allies. President Woodrow Wilson, of self-proclaimed Irish stock, complained that “some Americans need hyphens in their names, because only part of them has come over” and worried that those with Irish sympathies might also harbor divided loyalties should the U.S. find itself allied with the British. Communicating with the British foreign minister, he shared his concern that “many of our citizens of Irish birth and sympathy… have been inclined to make common cause with the German sympathizers here.” Wilson explicitly worried over Devoy, calling him “a leading example of a hyphenated American of questionable loyalty.”

Wilson had good reason to worry. In August 1914, Devoy met with Roger Casement and a German envoy in New York City to secure a shipment of arms from Germany to Ireland. Though the shipment was captured in October and Casement exposed, Devoy continued to organize and fundraise for the Irish cause. In 1915 Devoy arranged American speaking tours for both Padraig Pearse and Joseph Plunkett, two radical leaders promoting the push towards independence. Meanwhile, Rossa, who had been in failing health, passed away. Devoy and his Irish consorts shipped the body back to Dublin for a symbolic burial in the homeland, where Pearse gave a prophetic eulogy. “They have left us our Fenian dead,” he declared, “and while Ireland holds these graves, Ireland unfree shall never be at peace.” While Pearse foreshadowed rebellion in Ireland, across the ocean Devoy continued to fundraise, collecting over $100,000 for the illicit purchase of weaponry for the Irish cause through Clann na nGael in the United States.

When Irish radicals stormed the GPO and the Four Courts on April 24, and Pearse read the Irish Proclamation aloud the following spring, he was quick to acknowledge the American roots of the insurrection. The Proclamation explicitly recognized the rising as “supported by her exiled children in America.” Of the seven signatories, five had spent time in 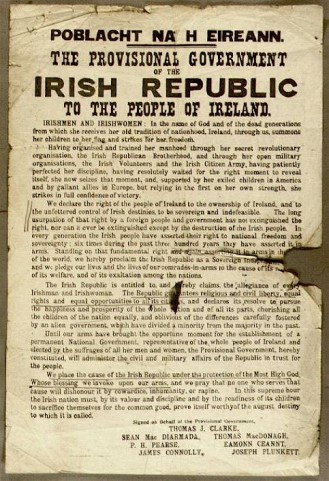 America, either in exile or on speaking tours arranged by Devoy and many of the rifles and munitions of the Irish volunteers were purchased through U.S. funds.

Even the surrender of the Irish radicals on April 29, 1916 did not signal the end of American involvement in the violent quest for Irish independence. In the aftermath of the rising, U.S. diplomats negotiated the commutation of several death sentences for Irish-Americans involved in the uprising, including Éamon de Valera and Jeremiah Lynch. Valera would go on to lead the Irish War of Independence in 1920, fight in the Irish Civil War in 1922, and serve as the Irish President and Taoiseach in later life. Other Irish Americans would go on to fight in the same wars of independence and civil strife into the 1920s, and as late as the Irish Troubles of the 1970s, 80s, and 90s, U.S. sympathizers would continue to fund Irish Republican Army efforts in Northern Ireland. To this day, the chorus of the Irish National Anthem, Amhrán na bhFiann, references American support and involvement in Irish independence movements:

“Soldiers are we, whose lives are pledged to Ireland

Some have come from a land beyond the wave.

Sworn to be free, no more our ancient sireland,

Shall shelter the despot or the slave.”

At the centennial of the Easter Rising, it is worth remembering the American connections to the bloody legacies of the Irish struggle for independence.

The GPO during the Easter Rising

Rafael Ricoy, “How Americans Pushed the Irish to War,” The Boston Globe (March 9 2016)

One thought on “An American Insurrection in the Irish Streets” 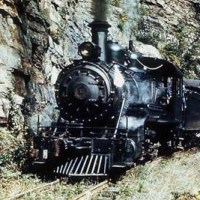