“It may be asserted, without hesitation, that no event is so terribly well adapted to inspire the supremeness of bodily and of mental distress, as is burial before death.”

If you read about the subject of premature burial, chances are you wisome mention will be made of Poe. We have been guilty of turning Poe into a cliché – the spokesman for all things macabre and extraordinary. The author-poet’s habits and the manner of his death have contributed to the illusion that he had a characteristically haunted mind.  How else, for example, could he have described so vividly the “unendurable oppression” and “rigid embrace” of being buried alive in his famous 1844 short story? It is also said he was a product of his times, emboldened by the over-sentimentality of Romanticism.  However, the best evidence shows that Poe’s keen descriptions of premature burial were not simply the creation of a troubled imagination – he was mirroring stories that he read almost every day in newspapers and magazines. 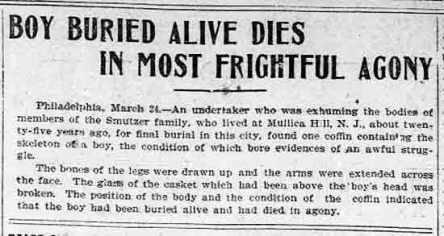 The topic of “hasty,” “untimely,” or “premature” entombment not only lets us share in morbid curiosity; it has been one of humanity’s most consistent collective fears.  In the United States, this fear connects us across rigid divisions in time.  A Philadelphian living during the yellow fever epidemic of 1793 might have experienced the same anxieties as an Ohioan archaeologist poised on the brink of the Progressive Era. That the vast majority of premature burial claims were eventually found to be either exaggerated or false is beside the point. When assessed as a whole, it becomes less necessary to quantify these stories than it is to determine constants in human psychology and emotion.

Tales of premature burials have existed since ancient times.  It is said, for example, that unchaste Vestal Virgins were buried alive because it was forbidden to kill them by drawing blood. The act has been used as punishment, as a vehicle for fearmongering, and as a prompt for improving medical procedures.  During the Enlightenment, which emphasized intellect and reason, cases of premature burials were used as examples of society’s prejudice against the individual.  If a person was buried alive, it meant that they were a victim of traditional customs (quick turnarounds from the death to burial) and of “overhasty judgment” (not receiving a fair pronouncement of death).  In the eighteenth century, most people died alone or at home surrounded by family, not in the presence of doctors.  Thus, it was feared that non-professionals might misjudge a deep coma or weak pulse as true death.

Europe’s obsession with premature burial inevitably spilled over into its foreign colonies and eventually, nascent American culture.  During the 1793 yellow fever epidemic in Philadelphia, a newspaper reported gross mismanagement of burial procedures:

…many persons, suffering with disease, were removed from their houses and interred before the vital spark of life had fled. So general was this desolating scourge, that those who officiated as undertakers, acted without any check or responsibility, and if entering a house, the door of which was marked with the fatal characters of the disease, the dying were taken with the dead, to avoid the trouble of a second visit; there was none to call them to account. 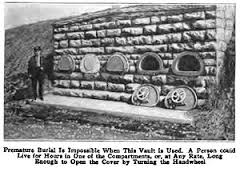 A burial vault built circa 1890 with internal escape hatches.

The anger of there being “none to call them to account” was a vestige of the Enlightenment crusade against the prejudice of reckless judgment. Undertakers acting “without any check or responsibility” heightened an instinctual horror to a social and political one. Much like we have coined the term “outrage bait” in today’s social media, publications promoted these stories because premature burial was such a widespread fear, almost no one would deny the injustice of it.

Fifty years later and beyond, Poe’s prose on this enduring, morbid subject captivated readers.  But his depictions of becoming suffocated by dirt and darkness were actually fairly typical when compared with other contemporary reports.  Early nineteenth-century writing was said to have been ruled by “the cult of sentiment.”  Innumerable “cases” from around the world enabled Poe and others to profit from hysteria.  In one famous passage of “The Premature Burial,” we are given a “history” of a Baltimore man who catches the skeleton of his wife when he opens his family vault, evidently because she had been trying to escape.  Poe likely took this story from James F. Otis’s “Buried Alive: An Ower True Tale,” which describes the discovery of a skeleton falling out of a vault containing a shattered coffin. “Oh! What a waking must have been hers!” the narrator laments.

Pervasive concerns about alienation and mortality did not die as the United States became an increasingly professionalized nation.  A first-hand account from 1888 by Warren K. Moorehead, who is considered the “father of American archaeology,” ushered in a new kind of burial story anchored to more scientific ideals. The Progressive Era (1890-1920), which emphasized empiricism, was just beginning. While working on an excavation in Ross County, Ohio, Moorehead was buried alive when a cascade of dirt fell on him during an excavation.  Five years later, he recounted the experience for Science magazine:

My arms and hands were perfectly motionless. The chest could not be inflated or moved the slightest distance. On the contrary, the downward pressure forced all the air out of my lungs. I remember how hot the earth against my face became as the last breath was forced from me. Just in front of my mouth and chin was a slight hollow, formed by the arching of two good-sized lumps of clay. I could move my chin and open and shut my mouth. That was the only part of my entire body that could be moved. I remember trying to keep my mouth shut to keep out the dirt. But after a few seconds my mouth instinctively opened, and, the arch having broken down, earth filled it. I remember the horrible sensation of trying to dislodge the earth and the fear of strangling that suddenly seized upon me.

Moorehead was rescued and did not have any lasting injuries, but he continued to have nightmares about dark and enclosed spaces. He hoped, however, that his ordeal would “furnish material for consideration among medical men” and increase understanding of the emotional and physical effects of premature burial. Thus, while the archaeologist used less sentimental and more empirical language than accounts from past eras, his fears mirrored those of his predecessors’.

Today, medical knowledge has expanded to the point where certain fears can be assuaged, but anxiety over premature burial lives on in debates about life support and organ donation. The fear of being buried alive is part of human nature. It is telling that people who lived in periods defined alternately by sentimentality and rationality were equally open to discussing feelings of dying in such a direct manner. While scientific publications like the British Medical Journal eventually pronounced premature burial tales “as fruitful as ever of barren correspondence,” historians should see value in the storytellers’ openness.  Both fictional and “true” accounts of this practice flooded American dialogue and bridged a collective humanity over vastly different eras.

Jeffrey Freedman, “The Limits of Tolerance: Jews, the Enlightenment, and the Fear of Premature Burial,” in Into Print: Limits and Legacies of the Enlightenment; Essays in Honor of Robert Darnton, ed. Charles Walton, University Park, PA: Penn State University Press, 2011.

One thought on “Vivisepulture: An Ancient Fear in American Minds”