Across the street from Puerto Rico’s capitol building in the Puerta de Tierra sub-barrio of Old San Juan stand nine solitary bronze statues. These life-size statues line a broad boulevard known as the “Paseo de los Presidentes,” or the “Avenue of Heroes.” Depicted are the nine sitting U.S. presidents to have visited Puerto Rico, beginning with Theodore Roosevelt in 1906. The two latest additions, unveiled on February 20, 2012, are of former President Lyndon B. Johnson and President Barack Obama. The latter spent four hours on the island on June 14, 2011. Why cast such a brief visit in bronze? The statues and their close proximity to the island’s center of government shed light on the political dynamic between the U.S. and one of its oldest territories. Furthermore, their presence calls into question why we memorialize the past in the first place.

From 1870-1874 and in 1897, Spain granted to Puerto Rico autonomy to govern independently. At the end of the Spanish-American War in 1898, however, Spain ceded Puerto Rico to the U.S. under the Treaty of Paris, thus preventing Puerto Ricans from implementing their autonomous government. Since then, Puerto Rico has undergone several changes in political status. In 1917, the Jones-Shafroth Act made the island a U.S. territory. Signed by President Wilson on March 2, 1917, the Jones Act gave Puerto Ricans U.S. citizenship.

In 1950, President Truman signed the Puerto Rico Commonwealth Bill, enabling the territory to establish its own constitution. Despite sustained and violent Nationalist resistance, talks of statehood increased following the admission of Alaska and Hawaii to the Union under President Eisenhower in 1959. Over the next several decades, the commonwealth held three referendums in which a call for statehood was rebuffed by voters. Nevertheless, the question of statehood has remained a prevalent, albeit divisive issue to this day.

In the early 2000s, then President of the Senate of Puerto Rico, Kenneth McClintock, championed legislation to commission the first seven bronze statues of Presidents Theodore Roosevelt, Hoover, Franklin Roosevelt, Truman, Eisenhower, Kennedy, and Ford. More recently, current Senate President Thomas Rivera Schatz and House Speaker Jennifer González have done the same for the recently-unveiled statues of Johnson and Obama. Like McClintock, both Rivera and González are affiliated with the pro-statehood New Progressive Party.

It is no coincidence that the linear park sits across the street from the capitol building complex. By commissioning these statues in the heart of San Juan’s political center, McClintock sought to strengthen, or forge, the bond between country and territory, as a cog in the machine that continues to push for statehood to this day. At the very least, these statues call into question Puerto Ricans’ inability to vote in general elections, despite being U.S. citizens. These past and present endeavors, seen in this sense as pervasive political maneuvers, are a testament to the living nature of memorialization. Though a statue may help us remember a past person, event, or ideal, it can never be entirely separated from the time in which it was made. A monument or memorial is representative of its subject but also of the society that builds it.

Presidents Truman and Roosevelt along the “Paseo de los Presidentes”

Perhaps more intriguing than the current political climate is the significance of FDR’s statue within the larger historiographical context of his life. FDR did much for the territory during his presidency. As part of the New Deal, he created the Puerto Rican Reconstruction Administration (PRRA)—the product of a modified and compromised Chardón Plan. The PRRA called for improved and diversified agricultural development, public works, and the electrification of the island. While visiting San Juan on July 7, 1934, President Roosevelt remarked, “I believe in better homes. That means bringing about a better family life, better living conditions, a better chance for education, and a better chance for every person to earn his livelihood. Then we shall have better health conditions because unhealthy conditions are caused by a lack of opportunity to earn one’s bread.”

In 1960, Puerto Rico experienced the severest outbreak of poliomyelitis in the Western Hemisphere. The epidemic began in late-January and ravaged the country for over half a year, leaving behind 495 paralytic cases in its wake. Special studies conducted in San Juan demonstrated that those hit with the highest attack rate were in lower socioeconomic circles, unable to afford the newly-invented Salk vaccine. That FDR fought for a higher standard of living for all Puerto Ricans and battled polio contributed to a very favorable image of the man in the ensuing decades.

San Juan’s bronze life-size statue of FDR, sitting in a wheelchair with his dog Fala, is believed to be just one of three statues visually depicting the president’s disability—the other two comprise his national memorial in West Potomac Park, Washington DC. Dedicated on May 2, 1997, the FDR Memorial in DC was immediately mired in controversy. The memorial’s designers chose to show FDR sitting in a chair covered by a cloak, much as he would have been seen in his lifetime. The president took great pains to mask his disability given the stigma of weakness and instability associated with disabilities at that time. With the use of a cane and one of his advisors, he created the illusion that he was walking in public. With braces, he would maneuver his hips and swing his legs forward to create a sense of motion. He asked the press not to take any photos of him walking, maneuvering, or transferring to and from his car. When some did not comply with this request, the Secret Service was assigned to purposely interfere. Today, only a handful of photos exist showing him in a compromised state.

In West Potomac Park, the first (and originally only) statue of FDR sitting in a regular chair includes two very small caster wheels attached to the chair’s back legs. Impractical and hidden from all but those who know to look for them, it is hard to call this gesture anything more than a symbolic compromise with those wanting to highlight his disability. 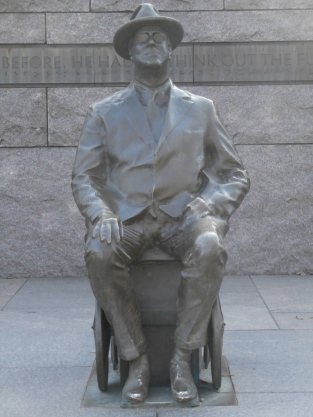 The compromise, however, was not enough for some. The National Organization on Disability spearheaded a six-year campaign to build an additional statue of the president making his polio affliction apparent. On January 10, 2001, this additional statue was dedicated at the entrance to the national memorial. President Bill Clinton, presiding over the ceremony, called the statue “a monument to freedom—the power of every man and woman to transcend circumstance, to laugh in the face of fate, to make the most of what God has given.”

Less than a decade later, discussions on the first seven bronze statues in San Juan had commenced. Where debate had raged in DC, the decision in San Juan seemed an obvious one. A precedent had been set in West Potomac Park, buoying the historical correlation between Puerto Rico’s devastating 1960 polio season and the crippled president who fought for socioeconomic equality. All of this validated the notion that FDR could and should be shown in his wheelchair.

Contemporary society is happy with the decision to show his disability. It humanizes a man whose achievements seem superhuman. It shows us that a disability as crippling as polio could not hold back greatness. It is indicative that one need not feel ashamed of having a disability in today’s society and represents the open dialogue that has replaced fear and shame.

And yet, it is not wholly historically accurate. Are memorials meant to be? Today’s visitor may learn FDR had polio and from age 39 on spent his life in a wheelchair, but they will not learn of the great extent to which he went to hide his ailment and engineer a public deception. They will not learn of the disability-phobic culture an embattled man fought against to maintain his authority. What is more, and perhaps troublesome, is that other “revelatory” elements of the Roosevelt legacy have been airbrushed from history. Eleanor’s iconic fur boa and Franklin’s cigarette holder are nowhere to be found in their depictions. Wearing fur and smoking are not currently fashionable, so it seems. In this sense, the national memorial is representative of the “progress” made, in part due to FDR’s own actions and our contemporary needs and beliefs, more so than to the man himself and the times in which he lived.

The San Juan “Paseo de los Presidentes” seems even less about the men themselves. Political leaders with annexationist and autonomous tendencies are still playing tug-of-war with the island today. The bronze statues represent a monumental pull for statehood. On November 6, 2012, the Puerto Rican government held a referendum on its political status. Though the fourth to be held since 1967, it was the first in which a majority voted for statehood. It is not unthinkable to imagine a debate on the 51st state broaching Congress in the coming years. Nevertheless, Puerto Rico will remain a U.S. territory until further action is taken and more statehood support garnered. Perhaps when the debate does reach the floor of Congress, more bronze presidents will look upon the façade of “El Capitolio.”

The amalgamation of present-day ideologies with historical significance in monuments and memorials is not a problem that needs fixed. Rather, it is a testament to our complex relationship with the past. History can never be wholly objective, no matter how much we would like it to be. Acknowledging layered and often discordant perspectives on historical subjects, as evidenced by these three FDR statues, engenders a more complicated, but more wholesome historical picture. For those who claim that history is not a living enterprise, think again.

Click here to read about Franksgiving and the New Deal!

3 thoughts on “What Can FDR’s Polio Do For You?”