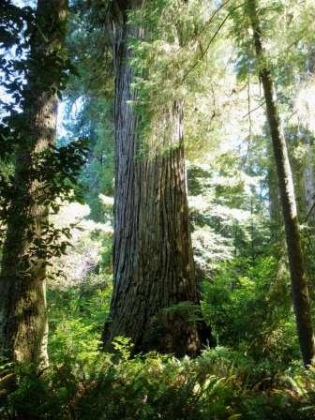 Deep within the 10,430-acre Jedediah Smith Redwoods State Park dwells the Grove of Titans. This grove of Coast Redwood trees (Sequoia sempervirens) was discovered on May 11, 1998 by botanist Stephen Sillett and naturalist Michael Taylor. Unlike the General Sherman in Sequoia National Park, the exact location of the Grove of Titans has not been revealed to the public out of fear that excessive foot traffic may upset the ecosystem or lead to vandalism. Nevertheless, intrigue and unofficial tourist sites abound with information on these titans and how to find them.

Individually naming the redwoods has only increased the mystery surrounding them. Del Norte Titan and the Lost Monarch, for example, rank in the top five largest coastal redwoods by volume even as a slew of new titans were discovered in 2014 and early 2015, blurring the validity of current distinctions. Suffice it to say, the Grove of Titans holds some of the largest species in the world, with personalized names such as El Viejo del Norte, Screaming Titans, Eärendil and Elwing, and Stalagmight to captivate the adventurous and perhaps lucky visitor willing to stray off the beaten path for a look at these behemoths.

Named after the first American to travel, by land, from the Mississippi River to California in 1826, Jedediah Smith Redwoods State Park is one of four parks cooperatively managed as Redwood National and State Parks (RNSP). On October 2, 1968, President Lyndon B. Johnson signed into law the creation of this joint National and State Park system. On the surface, little changed. The measure simply provided for the transfer of three preexisting state parks (including Jedediah Smith) to the federal government, in addition to a newly-created national park further south along Redwood Creek.

After significant expansions in 1978 (48,000 acres) and 2005 (25,000 acres), the total acreage of RNSP today is roughly 133,000 acres. This acreage, however, is not all in one place. When looking at a map of RNSP, one sees a highly fragmented, seemingly gerrymandered park system that reeks of political maneuvering. Behind this disparate result lies a battle between two preservationist groups whose competing world views contributed to a joint park system that speaks more to their philosophies than to the redwoods themselves.

Throughout most of their history, the Sierra Club and the Save-the-Redwoods League had fought for the same cause in harmony. Formed in 1892 and 1918, respectively, industrialization served as a catalyst for preservationist pursuits. Both groups, through their philosophies, sought to reconcile theism with Darwinian evolution. They believed there to be design in nature and had a constant faith in human progress and divine will.

One Club founder, Joseph LeConte, stated, “The very existence of man proved that evolution moves toward greater physical and spiritual development.” These leaders believed “parks were temples within which to worship a universe of continuity and design.” In their preservationist pursuits, both Club and League leaders looked to save the highest examples of “evolutionary momentum”—the towering coastal redwoods were a perfect example.

Leaders sought to balance preservation with a practical sense of use. Man not only was able but had the right to manipulate nature for his benefit. This ‘tendful gardener’ notion was central to both organizations’ beliefs. Nevertheless, funding sources differed. The League’s financial base benefited from industrial capital and wealthy philanthropists with ties to logging. The Club—at the time a nonprofit, philanthropic organization—relied heavily on tax-deductible dues and volunteer services. This organizational difference would come to play a significant role in the debate for a Redwood National Park in the 1960s.

The League believed that Americans should earn their parks through private enterprise and state funding. Until that point, they believed the National Park Service (NPS) had acquired “low-quality parks.” And to make matters worse, this “cheap showmanship” had sapped states of their rights. It was with this philosophy that the League spearheaded 1927 and 1928 legislative and public campaigns to raise private money for the creation of the California state park system. Together, the state of California and the League went on to establish Humboldt, Prairie Creek, Jedediah Smith, and Del Norte Coast Redwoods State Parks.

A predominant tenet of these four state parks was accessibility. They were created for man’s benefit. Roads ensured well-traveled parks. Groves could be easily accessed by major arteries through the state parks such as the Avenue of the Giants and the Redwood Highway (northernmost 350 miles of U.S. 101). The League’s progressive world view flourished under the belief that the creation and control of these state parks represented the final conquest of the West.

Despite the Sierra Club’s support of the League’s state park endeavors, the Club came to view the notion of ‘wilderness’ with increasing importance as their outlook on human progress dimmed. By the 1960s, their stance on roads was nothing less than hostile. The Club argued that the state parks were too small and too close to highways to allow for a “wilderness experience.” With the increasing acceleration of the logging industry, made possible by the tractor, the Club abandoned its teleological worldview for philosophical naturalism. They had lost their faith in man. Now, with randomness of the universe replacing divine will, a wilderness untainted by man’s touch offered much more than a controlled park. Rather than master the world, the Club sought to understand it. This new apocalyptic vision was best summarized with a statement from the Club’s executive director in 1960, “What we save in the next few years is all that will ever be saved….” 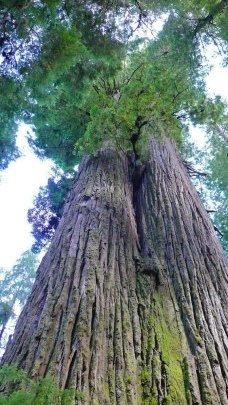 It was in the midst of this newfound shift in philosophy that the debate for a national park ignited. The League asserted that though the “redwoods merited national park status”, the “best and most representative of these forests are now in California State Parks . . . intelligently protected.” And they were right. Their persistence was rooted in a sense of accomplishment. By 1964, the League had preserved 102,000 acres of forest in four highly-acclaimed state parks. The debate became one of quality versus quantity. The Club demanded a significant quantity of unmolested forest as security from recreational use. This would ensure a proper wilderness.

This polarization found its way into the compromised bill set before President Johnson on October 2, 1968. Today, the fragmented nature of RNSP illustrates the conflict. It is neither wholly a national park nor a state park system, but an amalgamation of both. Most visitors hold that the best, oldest groves remain within the state parks, but after extensive additions to the national park, perhaps the clamor for a wilderness experience has been dulled.

Thus we come to the paradox of the Grove of Titans—a wilderness, hidden from the public, within a state park. The grove represents the League’s vision for a park that serves as a museum in which to study the culmination of progressive evolution. These redwoods at the pinnacle of it. And yet, it is a museum for no one. These titans are considered too special to promote for human interests. The ecosystem has rightly taken precedence over tourism—a perspective largely reflective of the later Sierra Club.

Even though the state parks serve as a bastion for human access, the ideals of inaccessibility and wilderness have found their way in. The Grove of Titans, then, simultaneously embodies the spirits of two diametric preservation groups. We are told to appreciate the titans simply because of their existence, though this does not seem to be enough for some. The result is a philosophic quandary as fragmented as Redwood National and State Parks itself.

Three redwoods in the Grove of Titans are named Eärendil, Elwing, and Aragorn. If you enjoy Tolkien’s Middle Earth, click here to read about The Hobbit’s artwork in American publishing!