Civic competition between Chicago and Paris came to a head on October 9, 1893. This was the day Frank Millet, whom master planner Daniel Burnham had appointed to boost ticket sales, designated “Chicago Day” at the World’s Columbian Exposition. Now in the final weeks of its six-month duration, Chicago’s fair had been a triumphal success. Following in the footsteps of the record-breaking Exposition Universelle of 1889, replete with a centerpiece designed by Gustave Eiffel, expectations could not have been higher for the Windy City to surpass the success of its French predecessor.

“Chicago Day” shattered the Parisian attendance record of 397,000, tallying 751,026 visitors in one day of business. The Chicago Tribune argued that no greater gathering of people had occurred since the massing of Xerxes’ army of over five million soldiers in the fifth century B.C. A young Pittsburgh engineer, George Ferris, stood in awe of the crowds from atop his American response to the Eiffel Tower.

In celebration of the fair’s success, Millet had planned the “most gorgeous display of fireworks ever seen in America” to illuminate the night sky over Lake Michigan. This show included explosive set pieces that were affixed to large, grounded metal frames. When set alight, these displays would depict recognizable portraits and tableaus. The first of these brought to life a scene known only too well by most Chicagoans in attendance that day—the Great Fire of 1871.

This was only fitting as the opening display. After all, October 9th had been chosen for “Chicago Day” to mark the anniversary of the fire, which ravaged the burgeoning cityscape from October 8-10, 1871. It left in its wake 300 killed and 100,000 homeless while consuming over 17,500 buildings and inflicting $220 million in damages—roughly a third of the city’s total value. The World’s Columbian Exposition served as a visible statement to the world that Chicago had not only recovered from the disaster, but had rebuilt and returned anew stronger than ever.

Part of the show’s opening salvo featured a cow kicking over a lantern in a barn at 137 DeKoven Street. This popular legend, initially instigated by Chicago Republican reporter Michael Ahern, held that the fire had commenced when a cow kicked over a lantern while being milked late at night by Catherine O’Leary—an Irish Catholic immigrant living in one of the city’s poorest working-class districts. Though Ahern admitted to the story’s fabrication in 1893, the legend has endured as a symbol of the event.

More recently, Chicagoans have come to see their city as the “Paris of the Midwest”—a place of culture and beauty. Whether it is the skyscrapers of the New Chicago School of Architecture or the neoclassical tradition introduced at the World’s Columbian Exhibition, the city has become a purveyor of architectural style and tradition comparable to Paris. Before Chicago’s architectural heyday, however, both cities shared a different, but intrinsically linked heritage: the fires of radical unrest.

In March 1871, just seven months before the Great Fire, the Paris Commune took the world by storm in a fit of fire, rage, and radical governance. After French Emperor Napoleon III formally surrendered at the Battle of Sedan on September 2, 1870, the Second Empire (1852-1870) swiftly collapsed as Prussian forces moved to take the capital city. The ensuing Siege of Paris, which lasted from September 19, 1870 to January 28, 1871, left the city starved and with a working class more radicalized than ever. Throughout the siege, revolutionary demonstrations at the Hôtel de Ville portended the coming civil strife.

In the midst of this power struggle, a radical socialist government protected by the National Guard rose up and seized power in Paris on March 18, 1871. For two months, the Commune ruled ruthlessly on radical principles, many reminiscent of the 1793-94 Reign of Terror. The killing of two French regular army generals and refusal to accept the authority of the evacuated Third Republic—now stationed at Versailles—led to what can only be described with one word in late May, 1871: a massacre.

La Semaine Sanglante, or “The Bloody Week,” began on May 21 as the Versaillais regular army entered a barricaded Paris to reconquer the city. As the Communards were brutally crushed, they set fire to much of the city, including the Tuileries Palace and the Hôtel de Ville. Intense street fighting throughout the week culminated on May 27 at Père-Lachaise Cemetery. At this National Guard stronghold, fighting continued among the tombs until the remaining roughly 150 guardsman were surrounded, surrendered, and shot at the cemetery wall. By May 28, 1871, the Commune ceased to exist. The horrors of its legacy, however, lived on as industrialization ushered in a new era of class warfare.

Newspapers throughout the world covered extensively the horrors committed by both sides in Paris. A medieval Paris that had been modernized under the Second Empire and the direction of Prefect of the Seine Georges-Eugène Haussmann had been left largely in ruin courtesy of the fledgling Communards. Conservative, business-class fears of similar revolutions plagued the Western world. It may come as little surprise, then, that in the months following the Paris Commune, reports of a rogue Communard living on the shores of Lake Michigan began to surface.

The 1871 fire’s culprit had long been a source of heated discussion. While most blamed the O’Leary cow, more sinister plots also cropped up, including one published by the Tribune on October 23 concerning an exiled Paris Communard. This perpetrator claimed to have set the fire to “humble the men who waxed rich at the expense of the poor.” This confession, likely a hoax, confirmed broader fears that the tragedy in Paris would manifest itself in what was quickly becoming the new epicenter of radicalism.

The Tribune building after the Great Fire

With the Tribune providing copious coverage, Chicagoans were well versed in the events of the 1871 Paris Commune. On the same night of the Great Chicago Fire, Reverend Robert Collyer of the Unity Church provided a sermon on the tragedy in Paris. Later working-class demonstrations were enveloped within the language of Parisian radicalism. In particular, the class struggles of 1877 bore witness to a reinvigoration of revolutionary and anarchist sentiments among those suffering in the new free-market industrial economy. Chicago workers often celebrated the anniversary of the Commune and strikers were referred to as “ragged Commune wretches.” On March 22, 1879, a crowd of roughly thirty thousand Chicago workers and their families sang the “Marseillaise” in celebration of the Commune and 1848 European revolutions.

As a steady rain smoldered the fire on the morning of Tuesday, October 10th, citizens began organizing recovery efforts. The elite business class, fully aware of the recent events in Paris, recognized the potential for a natural disaster to morph into one of class warfare and quickly enacted measures to quell any disorder. Mayor Roswell B. Mason appointed Lieutenant General Philip Henry Sheridan and the U.S. Army to patrol the city’s streets for two weeks, enacting what was essentially martial law. General Sherman promulgated a Death Proclamation to anybody found in the burnt district after dark.

Railroad Manager Cassius Wicker noted while on watch on Wednesday night that between 8 P.M. and 2 A.M. he heard “but 19 shots fired. Many, I hope, were false alarms, but it shows what little mercy is shown.” Resident Francis Test wrote that “soldiers march our streets; the citizens are patrolling the squares; every alley is guarded and woe be to him that lights a match or smokes a cigar on the street after nightfall.” He concluded his recollection by noting that while “some who have been shot deserved their fate, others were not guilty but indiscreet.”

The Great Fire exacerbated class divisions in Chicago. The fire helped to solidify “respectable” citizens’ association of distant Communards with the largely immigrant working class of their own city. The disaster also provided a physical map upon which these class divisions could play out. Architecture and urban planning became the tools with which social elites combatted lower class protests. Wood became the material of the poor. After the fire, elites called for a complete ban of wooden structures from all future construction in the city. Working-class residents protested that they could not afford to build more expensive brick homes. What few ordinances were enacted saw little enforcement as temporary wooden structures built by the Chicago Relief and Aid Society eventually became permanent establishments. 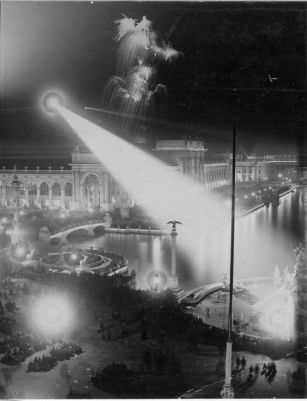 Nevertheless, the Great Fire served as a catalyst for bringing to Chicago young architects with innovative ideas and new technologies in hand. The ten-story Home Insurance Building arose in 1884-1885. Known arguably as the first “skyscraper,” this was the first tall building to be supported inside and out by a fireproof steel frame. More than a citywide and national statement, the White City of the 1893 Columbian Exposition was a statement by the social elites and wealthy investors against urban clutter, poverty, and everything represented by a radicalized working-class. Planners sought not only to surpass Paris’ Exposition Universelle of 1889 and its Eiffel Tower but also the bloody Commune that had preceded it. The fireworks display on “Chicago Day” was an explosive affirmation of the fair’s triumph over both.

The Great Fire of 1871 has remained emblematic because it demonstrated America’s capacity for renewal. Master planner Daniel Burnham convinced the world of a redefined American city: not one “wild and out of control,” but one of a “place of beauty that could control its wilder instincts.” Where Chicago and Burnham’s temporary but impactful “White City” differed from Haussmann’s Paris was that the former had been born in fire. France’s Second Empire proceeded with transforming the Parisian landscape in the midst of national and international turmoil, which came to a head in 1871 in the form of a violent Commune. Chicago, still only in its infancy, used its natural disaster and the fallout from Paris as excuses to revamp its landscape in the vision of its social elites. Whether a cow or a Communard, the melding of this disaster with the working class was deliberate.

Adam Gopnik, “The Fires of Paris: Why do people still fight about the Paris Commune?” in The New Yorker, December 22, 2014.

Erik Larson, The Devil in the White City: Murder, Magic, and Madness at the Fair That Changed America, New York, NY: Vintage Books, 2004.